Well I'm not sure if anyone would remember, but a LONG time ago (or it seems that way, anyhow) I did a cover reveal for this book from J. Taylor Publishing... I fell in LOVE with that cover and was so eager to read it, but somehow missed it when the email containing ARCs went out to the bloggers.  I was so very, very bummed when I realized I was a day late and a dollar short.  Then *cue angelic harp music* imagine my surprise when  L.S. Murphy popped up on my Making Connections Blog Tours!  *WooHoo*  There was MUCH rejoicing! 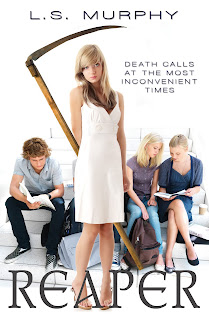 There's no way sixteen year old Quincy Amarante will become the fifth grim reaper. None. Not over her shiny blue Mustang. Her Jimmy Choos. Or her dead body.
She’s supposed to enjoy her sophomore year, not learn about some freaky future Destiny says she has no choice but to fulfill.
It doesn’t take long for Quincy to realize the only way out of the game is to play along especially since Death can find her anyway, anywhere, anytime. And does.
Like when she’s reassuring her friends she wants nothing to do with former best friend Ben Moorland, who’s returned from god-knows-where, and fails. Miserably.
Instead of maintaining her coveted popularity status, Quincy’s goes down like the Titanic.
Maybe ... just maybe ... that’s okay.
It seems, perhaps, becoming a grim reaper isn’t just about the dead but more about a much needed shift in Quincy’s priorities—from who she thinks she wants to be to who she really is. 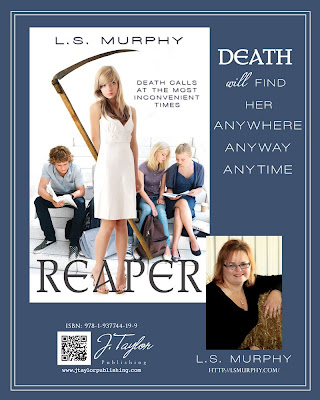 
L.S. Murphy lives in the Greater St. Louis area where she watches Cardinals baseball, reads every book she can find, and weaves tales for teens and adults. When not doing all of the above,she tends to The Bean (aka her daughter), her husband and a menagerie of pets. “A Reason to Stay”, a contemporary romance novella, is available as of November 2, 2012. Reaper is her debut young adult novel and will be released on January 7th, 2013.

She is a co-rep for the Southern Illinois region of Society of Children’s Book Writers and Illustrators (SCBWI) and a member of the St. Louis Writer’s Guild.

As you can probably tell from the beginning paragraph on this post, I was eager to read this book.  YA is right up my alley, and a new 'retelling' of the grim reaper always interests me.  I will admit my initial enthusiasm was tested a little.

My biggest hurdle in this book was Quincy herself.  As I said before, I adore YA, and this IS a very YA story overall, but 'Q-tip' was a special 'breed' (at least initially in the story) of teen: popular.  Maybe it's because I'm now 'old and jaded' and not in that mind-set of a teen willing to do near anything for peer approval... this may be harsh, but she was selfish.  Horribly selfish.  Especially the early on romance issues- just wanted to SMACK her... HARD.  But at the same time, that is totally true (character and age wise) for Quincy.  While I may not have been overly fond of Quincy, for a large part of the book, I still felt it was well written and honest for the genre and YA category.

The trials... finding out the reasons and goals behind what she was shown, and her change through the book to being unselfish, and maturing, and ultimately learning about death firsthand- they won me over in the end.  It hit me like a ton of bricks, in fact; misty-eyed, and a lump in my throat through the last chapter in the book.  It's not fully a surprise, I knew it was coming... someday.  But the 'how' of it all just gripped my heart.

By the end of it all, it earned a solid 4♥ rating from me.  If you like paranormal YA stories, this is one to pick up.

I receive a free eBook from J. Taylor Publishing via the Making Connections Blog Tours in exchange for an unbiased review.

Email ThisBlogThis!Share to TwitterShare to FacebookShare to Pinterest
Labels: Blog Tours and Hops, Paranormal Persuasion, YA