Crimson Darkness ~ Are You Ready for the Reveal? 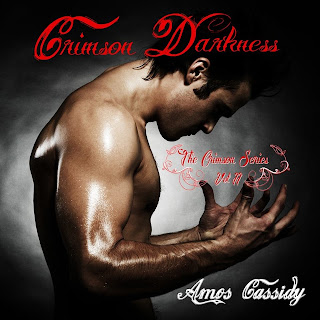 London is in the grip of an unnatural darkness. Rose is in the grasp of an unrelenting power and Raven and Thistle, along with their supernatural allies, are battling to survive and find a way to restore their home city.

For the fey, the song remains the same. They must return the power to Faerie or die.  Unfortunately for them, the task has been superseded by an even more important one - help save Earth or perish along with it!  For Rose, the stakes are even higher as she is forced to make a terrible deal that will damn her if she does and damn her if she doesn’t.

Take a job down memory lane to a previous stop here at Dark Obsession for Amos and Cassidy... 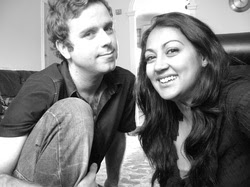 Aside from a passion for writing and a love of reading they also share an addiction to coffee, love anything Joss Whedon and are constantly playing tug of war over Jensen Ackles.

They have been writing together for four years and are currently working on the third book in their Crimson Series.

Hello, Alana and all you fabulous people! Amos Cassidy here.

To celebrate, we’ve come to visit Alana on her awesome blog and share with you the hot cover and an excerpt from the book.

So kick back, relax, pour yourselves a cocktail or two (or a nice cuppa as an alternative) and take a glimpse into the Crimson World…

Rose lay back in her sun-lounger, dark glasses shielding her eyes from the sun’s bright rays. Her body, clad only in a two-piece bikini and slick with sun block, felt warm and lazy.  She closed her eyes and visualised the beach around her; its sands almost as white as snow, the sea like millions of droplets of aqua crystals.  This was perfect.

“We should have done this a long time ago.” The playful voice pulled her out of her reverie and she sat up pushing her glasses to the top of her head to regard the speaker.
Roman shrugged his broad tanned shoulders and leaned back onto his sun-lounger.
“Just saying, we shouldn’t have waited so long.”

“Well we’re here now, so let’s just enjoy it.” Her lips curved in a nostalgic smile as she took in his solid lithe form sprawled out beside her.  His hair was bleached blonde by the sun, his eyes hidden behind shades of his own.  He was beautiful and she would never tire of caressing him with her eyes.

“You want to go for a swim?” he asked.
To swim with Roman, to feel his arms around her, his body wet, slick, and hot against her own, she sighed. “Maybe later.”
“Plenty of time.”
“Yep.”

“You look really hot in that bikini by the way.” She felt his breath warm on her cheek and cracked open her lids to find his face intimately close to hers. His smile was playful, sensual, desire darkening his emerald eyes. He leaned closer, his lips brushing the corner of her mouth.  She closed her eyes and allowed herself to revel in the sensation for a moment. Her eyes burnt hot in her head and she blinked against the sting of angry tears.  She pushed him away.

“No.  No touching.  Please.  Let’s just…sit. Okay?”  She looked up into the face she loved, her eyes pleading.
Roman sat back on his hunches, regarding her with an unfathomable look.
“Whatever you want, Rose.”

Rose closed her eyes.
When Rose opened her eyes the sun was gone, instead she found herself under a blanket of stars twinkling fiercely in a clear night sky.  No smog, no clouds, no obstruction.

“It’s something else isn’t it?” Roman asked from his spot beside her on the picnic blanket. The beach was gone and they were now in a moonlit park. “I’m glad we did this.”
“Me too.” Rose whispered softly.  The night was balmy and warm and the sundress she wore was soft and slinky against her skin. As she lay on the picnic blanket, one arm thrown across her forehead, the other by her side, she realised she may be losing the battle. It was a night for passion; she could feel the heat emanating from Roman.

All she needed to do was reach out and touch him, to say the word and he could be hers forever. As if hearing her thoughts he shifted closer; a soft rustle of fabric, heat caressing her bare arm, her legs.  She closed her eyes and felt him leaning over her.
“Look at me, Rose.”
She opened her eyes and stared at perfection, drank him in, allowed herself to believe.
“Yes, Rose.  I am all that you need.”

She wanted to believe, wanted to forget, wanted to accept.  It would be so easy to give in, to stay, and to be happy.  She must have made some sound, maybe a tilt of her chin, a look, something that screamed acquiesce because his lips were suddenly descending towards hers.  She closed her eyes and opened herself to her fate.

A blinding light split the night sky and Roman stilled above her, his face a mask of fury, every muscle poised to flee or fight.  Pain blossomed in her shoulder, sudden and white hot.  She gasped and struggled to push Roman away, he was, however, unmoveable, impervious to her discomfort.  His eyes were on her but his attention already diverted.

“You are not welcome here.” He spat out through gritted teeth.
Rose tried to slip from Roman’s grasp but his hands gripped her tightly, his fingers digging painfully into her shoulders.
“Leave now,” he said.

The light pulsed and then dimmed.  Rose craned her head to look over Roman’s shoulder and gasped.
“None of this is real, honey.” A familiar woman smiled at her from the edge of the picnic blanket.  Her gaze raked over Roman.  “Except him of course.” A look of sorrow flitted across her face, but was quickly covered by one of determination. “You have no claim here,” she addressed Roman and suddenly Rose was free and Roman was standing a few yards away in the shade of a maple tree.

The woman held out her hand to Rose. “I think its time we had a chat don’t you? Mother to daughter.”

I give the series a to-date a rating of: