It was 1 year ago today (June 30 th) that David Estes first published the first book in his first ever YA dystopian series, The Dwellers Saga, and changed his life forever. Since then, The Moon Dwellers has outsold and drawn more hype than any other of his 13 published books, and has risen to the top 10 of many YA dystopian lists on Listopia, finding a place amongst bestselling books such as The Hunger Games, Delirium and Divergent. The birth of The Moon Dwellers also changed David’s life forever. As he’s gone from struggling Indie author to fulltime writer, he’s watched in amazement as his Goodreads fan group has swelled from 300 members to over 1,300.

Since writing The Moon Dwellers, David has gone on to write and publish two sequels, The Star Dwellers and The Sun Dwellers, as well as three books in a sister series, The Country Saga (Fire Country, Ice Country, and Water and Storm Country). He plans to release the 7th and final book, The Earth Dwellers, in the combined series on September 5th later this year.

So what did David Estes want to do to celebrate The Moon Dwellers book birthday? His answer: “Give away as many free ebooks of The Moon Dwellers as possible!” So if you’re like so many others who are obsessed with YA dystopian novels like The Hunger Games, Delirium, and Divergent, and haven’t yet read the growing phenomenon that is The Moon Dwellers, now’s your chance to do so FOR FREE.

You can grab your free ebook of The Moon Dwellers from Smashwords.com using the coupon code below. And please feel free to share with your family and friends and pets, the more ebooks are given away the happier David will be. The only thing David asks for in return is that if you enjoy the read and continue on with the series, to please leave a positive review on Amazon.com for each of his books that you read.

Where you can find The Moon Dwellers: SMASHWORDS


And for those of you planning on reading The Dwellers and/or The Country Saga, here’s a special note from the author, David Estes:

The Earth Dwellers will cap off an eighteen month journey that has taken me from unknown Indie author to still-mostlyunknown fulltime Indie author. The change is a subtle one for most people, but for me it’s a dream come true. To the hundreds (and now maybe even thousands!) of readers who have come along for the ride with me, either by reading the Dwellers Saga, the Country Saga, or both, I thank you from the bottom of my heart.

However, I must highly recommend that before reading The Earth Dwellers that you read the three books in BOTH series. Trust me, doing so will greatly enhance your experience, as The Earth Dwellers will be taking significant characters from both series and crashing them together (yes, like a water country wave) into an action-packed tale of struggle and loss and hope and friendship…and maybe a little love, too.

Anyway, that’s my advice, it’s up to you what to do with it. In any case, thanks for being a part of my own adventure, I’m a better person for having written stories for you!

Other YA Books by David Estes!
The Evolution Trilogy:
Book 1- Angel Evolution

David Estes was born in El Paso, Texas but moved to Pittsburgh, Pennsylvania when he was very young. He grew up in Pittsburgh and then went to Penn State for college. Eventually he moved to Sydney, Australia where he met his wife and soul mate, Adele, who he’s now been happily married to for more than two years.
A reader all his life, David began writing novels for the children's and YA markets in 2010, and has completed 13 novels, 11 of which have been published. In June of 2012, David became a fulltime writer and is now traveling the world with his wife while he writes books, and she writes and takes photographs.
David gleans inspiration from all sorts of crazy places, like watching random people do entertaining things, dreams (which he jots copious notes about immediately after waking up), and even from thin air sometimes! Recently he’s been inspired by some of his favorite authors, like Suzanne Collins, Veronica Roth, and Maggie Stiefvater.
David’s a writer with OCD, a love of dancing and singing (but only when no one is looking or listening), a mad-skilled ping-pong player, an obsessive Goodreads group member, and prefers writing at the swimming pool to writing at a table.  He loves responding to e-mails, Facebook messages, Tweets, blog comments, and Goodreads comments from his readers, all of whom he considers to be his friends.
Where you can find David Estes hanging out:
David Estes Fans and YA Book Lovers Unite
Blog/website
Facebook page
Goodreads author page
Twitter 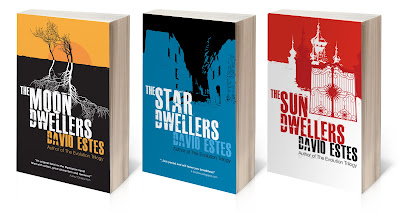 Check out ALL his books!


Want MORE Interviews, Character Bios,
and Oodles of Fun, Fun,Fun from (or about) David Estes and his books?

Overall, I'd give his Dwellers series
(what I have read thus far)

Email ThisBlogThis!Share to TwitterShare to FacebookShare to Pinterest
Labels: Blog Tours and Hops, Dystopian, Interviews and Promotions, Odds and Ends, YA