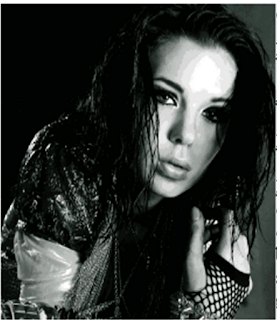 Likes: Adele likes spending time with her family, especially her father, who taught her to fight. She enjoys fighting for training purposes, and is a tom boy at heart, interested in anything that gets her sweating. She also shares a love for reading with her grandmother (now deceased).

Dislikes: She hates those that try to pull her away from her family. She despises bullies and anyone who tries to take advantage of the less capable.
Where he/she was born: Subchapter 14 of The Moon Realm

Character traits: Trained from her childhood by her father, Adele is armed with two very capable fists and a wicked roundhouse kick. She is strong, compassionate, and sarcastic. She has her father’s strength and her mother’s compassion, and a quick-tongue that is all her own.

Hopes, dreams, fears: Adele dreams of a time when she can be reunited with her family, when they can live in peace and contentment, when they have enough money to live off of, nothing more. She’s scared of losing those close to her, and will do anything to protect her family and friends. 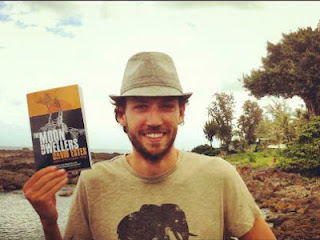 Muahahaha.... I've tricked... er, convinced David to give me another interview!
*And there was much rejoicing*

Thank you so much, David, for allowing me to gaze upon your blue eyes again! I really enjoy these fun interviews each time you have a new book out! I've made sure to throw some brand new whammies at you... First of all, may I say you are SO sweet for dedicating The Star Dwellers to your GoodReads fan club (of which I am a proud member!)

Thanks so much, it’s great (and somewhat scary) to be here :P *Staring, ready for interview, unblinking* *Ten seconds go by, David Estes blinks* Drat! I always sucked at staring contests!!

"I see those cute little wheels spinning, Adele. Have I blown your mind?"

There are so many new characters and delving deeper into previous 'side' characters... how on earth do you keep everyone straight in your head?

I fail mostly. It’s my beta readers that carry a lot of the weight here. I have an awful memory so I really struggle to keep all my characters and storylines straight, so I take copious notes, which I then proceed to lose. But that’s okay! Because when I write the wrong character’s name at the wrong time, my beta readers pick it up every time! And if they miss it too, my copy editor will catch it. Let me give you an example. I recently finished the first draft of The Sun Dwellers, which will be the third book in the Dwellers Saga. I sent it to my beta readers and one of them came back almost right away saying that one of my characters had an entire conversation with herself! Was it intentional, like maybe she just talked to herself? No! She was meant to be talking to someone else and for whatever strange reason, I gave her credit for every quote on both sides of the conversation. So yeah, it can be tough to keep it all straight but that’s why I’m so lucky to have an awesome team of beta readers and the best copy editor (Christine LePorte).

Have you actually mapped out a visual aid of the three realms?

Great question! I have. I spent three days and 50 pounds of paper mache` to create a three dimensional visual representation of the Tri-Realms, in which I now sleep (for inspirational purposes) whenever I’m working on one of the books.Yeah, that was lie and I apologize. I did, however, use my pathetic drawing skills to map out the Tri-Realms in one-dimensional beauty. So I am at least able to sort of keep Adele and Tristan’s travels throughout the Reams straight in my mind.

I'm curious, there are colloquialisms occasionally thrown in throughout each book, did you just pick some favorites or did you pick ones you thought would 'survive' through the ages?

Ooh, you caught me. I LOVE colloquialisms, I admit it. Sometimes they work, sometimes they don’t, sometimes I might be accused of being moderately cheesy. Generally, I just try to write dialogue in a way that will sound as natural as possible and in a way that will make people laugh, cry, or cringe. So to answer your question, I don’t purposely try to pick ones that will last throughout the ages. I take more the cross my fingers and hope they do approach.

Was it more difficult keeping with the romance between Tristan and Adele with their physical separation?

Absolutely. This is very tricky. I’ve received a little criticism (you know who you are!!) that I took my readers on a death defying jaunt through the Moon Realm (in The Moon Dwellers) during which it took almost the entire book for Tristan to finally catch up with Adele—and then…I split them up again. I know, I know, it was downright mean. But you have to remember, this is the truth of the dark world they live in. There are not always happy endings, but there is always hope. The sequel, The Star Dwellers, is a story of hope. Hope that the world can be changed into a better place, that good will overcome evil, and that Adele and Tristan can be together again. I won’t tell you which of those things come true, if any, but I will tell you that my characters are strong, determined, and will do whatever they can to make it happen. I’ll also give you a hint that I won’t make my readers suffer with Adele and Tristan apart in the third book (at least not for too long!).

Are you "just a guy"? Do you identify with Tristan and Ben? I mean, you wrote it, so obviously you're in all their heads. But did you base parts of either of those characters on yourself or anyone you know?

I am absolutely “just a guy.” I read books, I watch movies, I go to dinner with my wife (and shhh, I watch reality TV). I absolutely identify with Tristan and Ben. They are both celebrities in their own right, Tristan as the son of the President, and Ben as the Resistance leader, so they should seem different than other people, but they’re not. They care about others, they try to do the right thing, they have struggles.


I didn’t really base them off myself though, as they are way tougher than me! I also didn’t specifically base them off of anyone in particular that I know, but certainly tried to capture the best traits of the people that I most respect.


I know you've been eagerly awaiting this... the FUN questions! *yeah*
What would YOU do for a Klondike bar?

I am actually a huge fan of Klondikes, so quite a lot really. I would jump out of a plane (of course, I’d do that for free too). I would allow someone to use mind control to make me perform strange and unusual acts. I would eat something nasty (think worms) in order to get to that chocolately ice cream deliciousness.

Do you think androids dream of electric sheep?

I doubt they dream of them, that would just be creepy! I mean, do people dream of sheep? However, I would concede that androids perhaps count electric sheep to help them get to sleep. Wait a minute, do androids even sleep? Was this a trick question?

You can take a road trip with anyone (living or dead, fictional or real), who would you take and where would you go? I know you're already on a real life journey of this sort, but this is the 'fantasy, money-is-no-object' trip.

This may sound like a cop out, or boring, but this is the truth. I’d take my wife with me. She’s my best friend and I have more fun with her than anyone else, so yeah, I’m sticking with her! Where would we go? We would stick to warm weather places, because we’re both scared of the cold. And we would go places where there is a swimming pool to keep cool and because my wife loves to swim. Probably places like the Greek Isles, South America, and South of France.

Monty Python. The drier and more sarcastic the humor, the better for me.

So let's say, David, that something similar to the Dwellers is about to happen, huge cataclysmic event and everyone will be driven underground to live in caves and such... you can choose ANY dinner (can include dessert, salad, multiple dishes, no limits) as your last meal before heading into the caves and living off canned food for the rest of your life. What do you choose?

Note: If I’m ever on death row, my answer will be the same. A big, juicy burger with tasty barbecue sauce, jalapenos, and mushrooms. Steak fries with Heinz ketchup (is there any other kind?). I know, it’s a cheap option, but that’s what I crave the most. Forget filet mignon, lobster tails and caviar. I’ll take my burger! On the side I’d like a Caesar salad if you don’t mind. For dessert I’ll have a slice of ice cream cake from Dairy Queen.


"My mind has been officially blown."


Once again, you've put up with my crazy antics and I thank you for it, David! Hopefully I haven't scared you off for good when book 3 comes out! *Sigh* I still love those blue eyes.

Thank you so much Alana! I really enjoyed the unorthodox questions and energy and will definitely come back a third time if you’ll have me! I hope your readers enjoy the interview and my new book, The Star Dwellers! 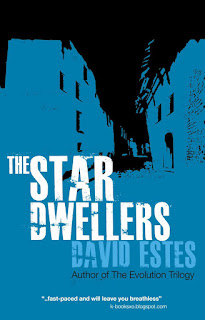 And I don't quite have the review done yet.... but my 'official' Dark Obsession Chronicles rating is:

Be sure to check out
David's Guest Post
on the Next Stop of the Tour Tomorrow @ Moosubi Reviews!
Posted by LoonyAlana at 9:32 AM

Email ThisBlogThis!Share to TwitterShare to FacebookShare to Pinterest
Labels: Blog Tours and Hops, Dystopian, Interviews and Promotions, YA