Ever After of Ella and Micha ~ It's Here + Excerpt! 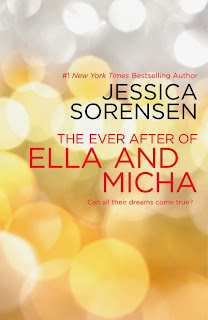 December 3, 2013; Forever E-Book; $2.99; 978-1-4555-8267-9
The day Ella has waited for is just around the corner. It’s the day she’ll marry Micha, the love of her life. But an unexpected package with a harsh reminder of Ella’s past and a once-in-a-lifetime chance for Micha to tour with his favorite bands threaten to ruin their happily ever after. Now Ella and Micha must find a way to balance their fears, their dreams, and their love…if they ever want to hear wedding bells. 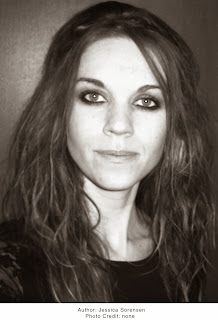 Author Bio:
The New York Times and USA Today bestselling author, Jessica Sorensen, lives in the snowy mountains of Wyoming. When she's not writing, she spends her time reading and hanging out with her family.

“Baby, come on. Let them be. They deserve a beautiful wedding not an elopement in a tacky fake church.” Lila glides her hand up the front of his chest, stands on her tiptoes, and kisses his neck. Then she whispers something in his ear as she plays with his hair.
I’ll admit they make a cute couple, especially now that Lila has this whole grunge thing going. Her blond hair is chin length and streaked with black that matches Ethan’s hair. She’s wearing jeans and a tank top that aren’t name brand like everything she used to wear when we were living together. Her style goes well with Ethan’s laidback look: his plaid shirt and faded jeans and a pair of sneakers that he’s probably owned since he was sixteen. And Lila’s average height allows her to nestle her head against Ethan’s chest comfortably. Looking at them with the sunlight and my house in the backdrop, I find myself wishing I had time to draw them.
After a lot of kissing and whispering in Ethan’s ear, Lila convinces him to stop complaining and he begrudgingly agrees that Vegas is a ridiculous idea and that Micha and I should get married in Star Grove.
“A week is not a lot of time to prepare a wedding,” Lila declares, pulling her sunglasses over her eyes. “Not a real one with decorations, flowers, dresses, tuxes, and guests. God, I wish we had more time to plan this.”
“And I wish you wouldn’t take any time to plan it,” I say, and when she frowns I sigh. “Sorry, I’m just not into wedding stuff.” I round the car to the passenger side of the Chevelle, trailing my finger across a few dings and chips in the black paint that were put there when Micha intentionally crashed it into the snow bank.
Micha opens the driver door and steps back so Ethan can climb into the backseat. “It doesn’t matter what kind of wedding we have,” he says, “just as long as Ella’s there with me. In fact, we don’t even need dresses and tuxes. We could even be naked and standing in my backyard and I’d be okay.” He winks at me over the roof of the car. “As long as we’re together, I’ll be happy and being naked would just be an added bonus.”
This makes Lila giggle as she ducks her head and hops into the backseat with Ethan. I push the seat back, get in the car, and shut the door, then pull the visor down to block the sunlight.
Micha adjusts the driver’s seat before he closes the door and starts the engine. “So is everyone ready for this?” He looks around at the three of us, but when his eyes finally land on me I know he only really cares about my answer.
It takes me a second to answer and he notices my hesitation and his expression starts to fall. But even though my throat feels dry I manage to say, “Of course.” My voice trembles a little.
“Okay then.” Giving me a small but slightly forced smile, he backs down the driveway and drives toward the highway, toward home where all of this started. Where Micha and I first met, first talked, first played, kissed, fooled around, danced, said I love you.
Where Micha and I began.
Posted by LoonyAlana at 12:30 AM