I have a special treat... a few hours later than I would have wanted but hey, fashionably late, right?  Well, if you've read some of my reviews, you should have noticed a name that seems to keep popping up... H.D. Gordon.  She is a SUPER talented writer that I've become a fan-girl of... and I got to interview her!  Muahahaha! 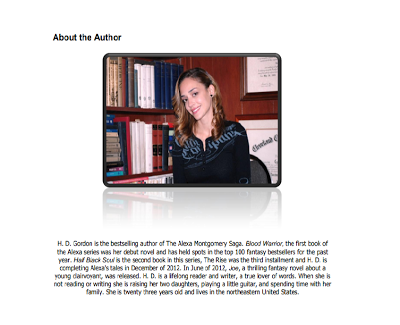 Why are you drawn to write YA verses adult novels?


This may sound strange, but actually, I'm not. I don't think of my books as YA, and I never have. That was just sort of a label that was slapped on the Alexa series because of the age of my characters, but I don't think the content of any of my books is really YA. That would mean there were rules I would have to play by, and I hate to play by rules. Also, Joe, which is the other book I've written, is anything but YA. I think they're calling that one New Adult, or some shit...Can I say shit? See? No rules. I just tell the story that I want to tell, and then other people decide what catagory they want to label it as. That's okay with me.

What inspiration did you draw on for your mythology behind all the supernatural creatures?

Oh, I've been inspired by supernatural creatures for as long as I can remember. My whole family has always loved vampires (though my brothers wouldn't admit it if you asked them now), werewolves and every other thing that could go bump in the night for as long as I could remember. I'm not choosy when it comes to fantasy. If it's a good story, I want to read it or watch it or whatever. If it's good story and  there are supernatural creatures in it, I really want to read it. It's just part of my makeup, I guess. So I draw inspiration from everywhere, but mostly it comes from real life.

Did you intent for Alexa's "Monster" to be cognizant from the first book, or did it develop while writing the series into it's own personality?

I never intend for anything to happen in my stories. Things just happen as I sit down to write. I find it takes the fun out of it if I try to control everything, so I don't. I start with an idea, another idea comes along and slams into the first, and so on and so on. But I always knew that Alexa had a Monster inside of her. It was one of the reasons I liked her so much. Having it talk to her was just a cool thing that happened along the way, and soon Its voice was speaking through my fingers almost as much as her's was, and yeah, I guess it did develop its own personality. After a while, I thought of the two of them as separate entities as much as Alexa does.

Do you read reviews for your books?

Yes. Sometimes, and not all of them. I think as a writer you can drive yourself mad reading reviews. I know that I will never be able to please everyone, and I'm okay with that, as long as I am pleased with myself. Which, I always am, because in the beginning the writing was just for me, and in the ways that really matter, it still is.

Do you use multimedia (pictures of characters, music during writing, etc.) for the Alexa Montgomery Saga?


No, no pictures or music. I like dark and quiet. Unless you count the pictures and crazy things in my head.

Will the series be concluded soon, or are there several books left?

Redemption is the last book in The Alexa Montgomery Series, but there is a spin-off in the makes. It won't be what you expect. No rules, remember?

I will start working on the spin-off very soon, right after I have my wonderful do-nothing-but-sit-on-my-lazy-ass and read stage. I don't want to say too much about it, and since no one has read Redemption yet, this name won't mean anything, but I'll throw it out there anyway: Surah.


What are you reading right now or recently (other than this question?)

Lots and lots of Stephen King. I've got an obsession. I'm not even sure it's healthy.

Now for the fun questions!

What would you do for a Klondike bar?

Is there always room for Jello?

Don't really like Jell-O. I never trust anything that can come in the form of a blob. You shouldn't either.

Nipples on the Bat Suit... hot or not?

Not. I don't want my super heros running around with little plastic nubs...how are they supposed to get anything done?

Glass half empty or half full?

Depends on how I'm feeling. I'm a person who tends to go through lots of highs and lows...usually based on how my writing is going.

Why did the chicken cross the road?

To get away from the starving wolf on the other side?

If you could have any 'super power' (any kind of power or ability), what would you choose and why?

I think teleportation, as long as I could take people with me by holding their hand or something. Or super strength, or speed, or anything. I've pondered this question for a long time, since, um, like forever, and I can't really decide, but I love to travel, only I hate actually having to go places, so yeah, teleportation.

Zombie Apocalypse just started, what fictional character (from anywhere) do you want by your side to fight the undead hordes?

Honestly? This is going to sound cheesy, but I think I would want Alexa, or better yet, Alexa's Monster, because I think even zombies would turn tale and run away from her. Or I'd take Thor...because he's hott, and if you have to be in a crappy situation, a hot guy is always welcome.


Thanks for putting up with my weird questions, H.D.! I hope I didn't get too goofy for you!

Thank you for having me, Alana! Nothing is ever "too wierd" for me! 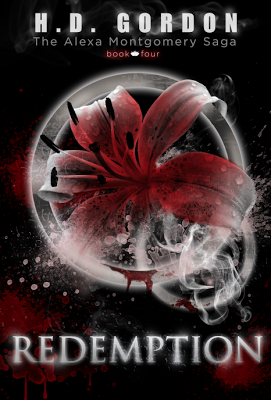 and already I can tell you just based on that first rough half...

The final test is here. The war is no longer a worry of tomorrow, but a reality of today. Turning back is no
longer an option. Maybe it never was. It is time for Alexa Montgomery to look fate in the eyes. Death
waits there for certain. The only question is... for who?


Check Out ALL the Stops on the Tour!

The War for Redemption


We are looking for H.D. Gordon’s fans of the Alexa Montgomery Series to join our
street team! What can you win?

•    Private google chat with the ever elusive H.D. Gordon


PLUS if you start or join a team Phase 1 of The War by December 31 st and
send an email to contest@hdgordon.com with your name and a link to your
Goodreads Profile to be entered to win your choice of these Alexa inspired
bookmarks via a random drawing.

a Rafflecopter giveaway
Posted by LoonyAlana at 10:32 AM