Until There Was You Release Day!

A new book has just been unleashed upon the world! 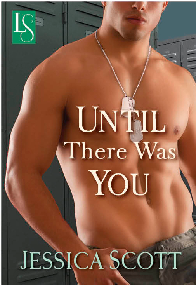 
UNTIL THERE WAS YOU
by
Jessica Scott

Jessica Scott returns with an all-new contemporary eBook original romance, following last fall’s release of her sizzling debut novel Because of You.

He plays by the rules, she’s not afraid to break them. Now these two strong-willed army captains will prove that opposites attract . . .

A by-the-book captain with a West Point background, Captain Evan Loehr refuses to mix business with pleasure—except for an unguarded instance years ago when he succumbed to the deep sensuality of redheaded beauty Claire Montoya. From that moment on, though, Evan has been at odds with her, through two deployments to Iraq and back again. But when he is asked to train a team prepping for combat alongside Claire, battle-worn Evan is in for the ﬁght of his life.Strong, gutsy, and loyal, Captain Claire Montoya has worked hard to earn the rank on her chest. In Evan, Claire sees a rigid ofﬁcer who puts the rules before everything else—including his people. When the mission forces them together, Claire soon discovers that there is more to Evan than meets the eye.

He’s more than the rank on his chest; he’s a man with dark
secrets and deep longings. For all their differences, Evan and Claire share two crucial passions: their country and each other.

Jessica Scott is a career army officer,
mother of two daughters, three cats,
three dogs and two escape-artists
hamsters, wife to a career NCO and
wrangler of all things stuffed and fluffy.
She has commanded two companies,
served in Germany, Korea, Fort Hood
and Iraq, and been lucky not to get fired.
She is a terrible cook and an even worse
housekeeper, but she’s a pretty good
shot with her assigned weapon.
Somehow, her children are pretty well
adjusted and her husband still loves her,
despite burned water and a messy
house.

"Jessica Scott is an exciting new voice in romantic fiction!"

"Edgy and current—and a truly satisfying love story. Put
this book, Jessica Scott on your “must read” list."