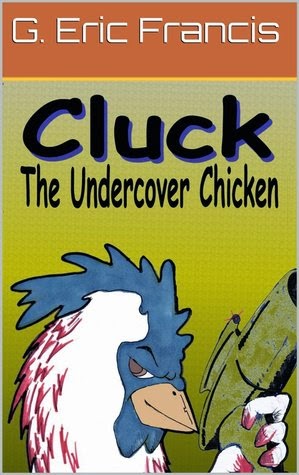 
It's a story about a rooster who can't stand being called a rooster, who also spends his time arguing with the writer of the book, while trying to save his planet(made of a mutated egg shell) from a crazed hen who wants equal rights...as long as she is absolute ruler.

And you think you have problems.

"Cluck" is a book that middle aged-kids (and perhaps some adults) will enjoy. An agent with "The Eggency", Cluck is the best at what he does. Sadly, his ego is as massive as his skills.

Besides being blinded by his arrogance, Cluck is helped along by "ST", the writer of his adventures and a voice only he can hear. While this causes some to question his sanity, together they make an uneasy, but successful partnership.
When a hen named "The Fan" (named because she has a deadly hand fan with her at all times) forms a worldwide cult in order to take over the planet, it's up to Cluck to toss a feather in her plans...if his ego doesn't trip him up first.


I always have crazy idea floating through my head, whether it be about undercover chickens, kids who discover the cure for some deadly disease, or other ideas that I hope to bring to life if (show some confidence, G...WHEN) folks like you continue to support my work.

I was born in NYC in the late 1960's (so I remember when "Scooby Doo" actually was good). I graduated from Syracuse University in the 1990s, and moved out to the MidWestern US when I figured making sandwiches for a living wasn't my intended purpose in life.


I met my wife while at a club called "Gators", and I have two As for what I like to read, anything that will take me on a grand adventure works for me...so "The Hunger Games" series is a big plus.


When I am not writing (or commenting on the world around me), I am a huge movie fan (summertime is my favorite time of the year), I collect music (over 19k on my iPod, with Prince being my favorite) and cheering for (and banging my head against the wall) my favorite baseball team, those 27 time World Champion Yankees (hope there aren't any Red Sox fans reading this :)


Well, that's it. Simple guy who hopes to write books that entertain you, all the while hoping to one day make a living out of it.


a Rafflecopter giveaway
Posted by LoonyAlana at 12:30 AM

Email ThisBlogThis!Share to TwitterShare to FacebookShare to Pinterest
Labels: Blog Tours and Hops, Giveaways, YA