'Take a Bite' of the Solstice Blog Tour!

In Gavin Moxley's world, there is no thin line between right and wrong. In a personal crusade to help sever a line of disease carried by a clan of vampires; Gavin has no choice to be ruthless. The Vampires are purposely infecting the human population…waiting for humans to actively pass it on to each other. Gavin takes no chances and executes them one by one. Not strong or powerful, finding humans before they turn into full vampires is ideal and Gavin’s best bet.


Yes, this is Gavin’s life…


…And nothing ever changes it until a young half breed vampire with special abilities, Solstice, attaches and makes herself a fixture in his life when she asks for his help and protection and when a reluctant Gavin agrees he joins a dangerous game of cat and mouse. There is no safe place and the pair are constantly watching their backs. Torn between his hate and his love for Solstice Gavin is thrown into a moral dilemma that only he can figure out but two things are clear…

His faith and Humanity are being tested and the past is not always forgotten. 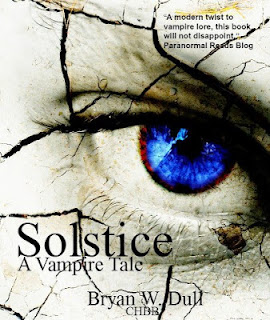 I have to say, I adore this new cover!
The previous one was just OK, but this is SO eye catching!

Well, isn't this a pickle?  Far different than I anticipated, and so much darker... but still that humor I loved to help smooth everything down.

I have to admit, this book ended up being far different than I anticipated. I found the opening chapters to be dark and intense, but some unidentifiable thing just seemed off. The kind of stark intensity I think could have been taken to an '11' to really just make it start off with such a *BOOM* that the reader wouldn't stop from being entranced. While it was a kind of shock value that grabbed me (there was some vivid scenes that left me squirming), I wish it had moved a little faster or something during the beginning. It seemed a little different and set apart from the rest of the book.

I will say, I think I underestimated this book before I read it. I didn't anticipate how dark the horror was, or how funny the well-placed snark was. I was even taken by surprise with all the ways I thought this book would go, but then *presto chango* a whole different route than I expected.

I also found the underlying mythology to be unique compared to many books out there with the same theme. Bryan Dull really took vampires by the fangs and made them into something I haven't read before. That is really so refreshing to see someone take an age-old horror and put a new spin on it while still not glossing over the fact that they are, indeed, horrors and monsters.

My biggest reservations that lead to a 4♥ review, is the beginning scene, and the myriad of questions the reader are left with. I have to admit, those first pages were so shocking, and just downright bloody, I worried the entire book was going to be like the beginning. Initially, I put it down for a while, because I was worried about the entire book making me squirm while reading. I'm glad I was able to pick it back up and continue on.  But that reservation at my first attempt of reading still did stick with me somewhat.  Another bone of contention... that ending.  It left me feeling a little frustrated and wanting.  Nowhere near the cliffhangers of the Fever series, but still leaves you hanging for the next book on many levels.

So, if you like dark stories, vivid and sometimes bloody descriptions, vampires, and something just a little different, check this out. But please, continue past that first section to get a true taste of the book. It's definitely worth it.

I received a free eBook from the author in exchange for a review.

Currently living in Cincinnati, OH with his wife (and fellow author Brandy Michelle) and their daughter. Bryan W. Dull goes leaps and bounds to get away from the norm and be his own person; with himself and his writing.  Since middle school he has always known what he was good at: entertaining and telling stories.  He has been consistently writing and coming up with plots for the last twenty years, but just recently decided to share one with the world.  His first novel, “Solstice” is a vampire book inspired by his daughter and noir literature.  Born in Anderson, IN, Bryan has also lived in Ohio, Florida, North Carolina and South Carolina (where “Solstice” is based).  Being a lover of all things art and pop culture “nerdism”; his interests lie in film, television, comics, games, anime, and books.  For a short while, Bryan dabbled in voice acting work only to shift his focus to his family and writing.  His favorite authors include; Chuck Palahniuk, Robert Kirkman, Clive Barker, Ernest Cline, and Neil Gaiman. And Check Out the Trailer for the Next Book, Equinox