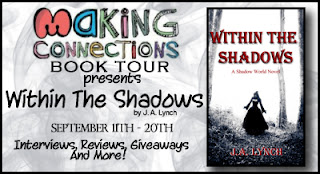 Within the Shadows by Julieanne Lynch (J.A. Lynch)


Living on the razors edge, Giselle Burgman's life is torn apart by her cheating boyfriend. Little does she realise that he is the least of her worries when her long term friend Alex introduces her to his family and a new, darker world. A world of lies, deceit and corruption. Thrown from one problem straight into another, the razors edge gets thinner and sharper, testing Giselle's sanity and vitality. Not even she can hide when living within the shadows.

Alarming as it might have been, I was quite excited. Sounds pretty crazy, but I think I got caught up in the moment, and being made a fuss of was definitely something I could get used to.
But, as always, reality has a nasty way of hitting you hard in the face.
I walked behind Atarah and Angelika as they led me through corridors that looked like something out of a gothic fairy tale. The walls were a strange shade of pomegranate, its boldness illuminated by softly lit candles. The wooden floors were temporarily covered with a bluish red runner that ran the whole length of the hall. Amaranthine drapes hung over the grand bay windows. The air had a distinct aroma, and although I could not quite place the smell I was sure it was incense. Its strong, fragrant smoke brushed the back of my nostrils, resulting in a few disapproving sneezes.
I sniffled, “Excuse me!” as we entered the hall through a large set of oak doors.
It was a very dramatic entrance. Standing below me were hundreds of unknown faces. A few stood out, but they were strangers all the same. They wore a mixture of black and purple clothes.
The women were dressed in floor-length gowns, their hair pulled back tight and their hands covered by long lace gloves. The men’s attire consisted of black herringbone frockcoats with matching black trousers. All wore purple shirts with black cravats.
I looked around, trying to find Alex, and there he stood with Leonid, in front of an altar.
It was the most spectacular scene I had ever seen. Lighted candles and floral arrangements of violets, orchids, red roses, lilies and irises filled the entire room. The scent was overwhelming.
Silence fell, and all eyes were on me. My stomach churned and panic set in. I wanted to run through the doors and as far from there as I could, but behind me were two large men, standing in front of the doors. They were not going to move for me.
I stood alone and watched the smile spread across Alex’s face as he ushered me to him.
I must have floated down the stairs, as I cannot remember walking down. The crowd moved as I walked down an aisle strewn with rose petals.
Alex looked amazing. I had never seen him look so handsome. He wore identical clothes to the rest of the men, except that his cravat matched the grey marl in the sash I wore around my waist. His smile illuminated the whole room
and in normal circumstances would have melted my heart, but there was something sinister in his eyes. A deep redness flickered in the light of the candles.
I was so out of my depth.
Taking my hand, he led me to a stone slab in front of the altar. Shaking, my voice quivered as I whispered to him.
“What’s going on?”
“It’s your consecration. Remember, you will be blessed tonight. Just follow my lead.”
He was so calm, and it seemed that he expected me to mirror his demure behaviour. I was anything but calm. Sweat began to seep in the palms of my hands. So many eyes were upon me.
Breathe Giselle, just breathe!
Alex, directed me to lie down on the stone slab. I obliged, and rested my body on the coldness of the rock beneath me. Incense filled the space around me; no air just smoky fumes. There were four men, one standing at each corner of the slab and each holding a staff. Their eyes filled with the crimson tide that was visible in both Alex and Leonid. Alex stood back and disappeared behind his father. I was alone with the strange men, each mumbling to himself.
From the altar came the voice of someone I knew.
Atarah. 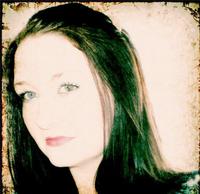 Fiery Librian Julieanne Lynch is an author of urban fantasy books for both adults and teens. Julieanne lives in Northern Ireland, where she works on her Shadows Trilogy and other series full-time. Before becoming a writer, she considered a few different career paths, a rock star being one of them. She studied English Literature and Creative Writing at The Open University, and considered journalism as a career path. However, she decided writing was the way for her and believes all of her education and reading prepared her for it.

An avid reader, Julieanne has always had an encompassing fascination with folklore. When not writing, she enjoys crime series such as Criminal Minds, CSI, NCIS and Cold Case, and loves anything with Vampires, listening to metal, meeting new people, drinking lots of green tea, and sharing her dreams with her children. She is a self-professed goth wanna-be, and is happy when left to write into the early hours of the morning.
Julieanne's YA series, The Shadows Trilogy, is published by Vamptasy Publishing and thus far contains In the Shadows. It follows the war between vampires and shadow creatures. Giselle Bergman, an 18-year old human girl, falls victim to a scheme by one of her closest childhood friends, and embarks on a journey that sees her become the centre of a battle between good and evil. 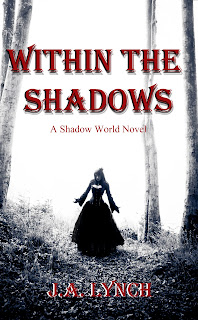