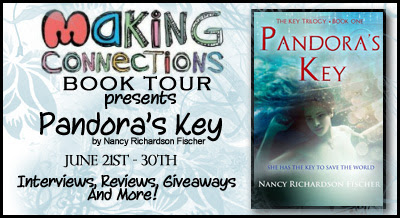 *Winner of the 2012 IndieReader Discovery Award for Young Adult Fiction.*

Pandora's Key by Nancy Richardson Fischer
My rating: 4 of 5 stars

This book did NOT end up like I expected at all. Not one bit- in a good way.

Some of the characters REALLY pissed me off. It is a good sign that the writing draws me in so much, that I start talking back to the book, "Oh, no- Bestie did NOT just say that!" I was honestly ready to throw my Kindle around I was so ticked off. You don't know why to trust, how deep the rabbit hole goes.

Evangeline was feeling like Alice in Wonderland hurtling down the rabbit hole.


"I do love you," he whispered, feeling unbearably sad. "But there's not enough love in the world to keep me from killing you if you stand in the way of my survival."


Very unique story, I don't think I've read any before that focus on Pandora. Even the few stories I can think of that involve Gods (as in Greek/Roman: Zeus and the like)... usually they focus on the Gods themselves, or the 'demigods'. But it was an interesting take on the story. I'm still trying to decide why the story slightly deviated from the one I grew up with, where Pandora trapped Hope in her box.

What a mind-f*&k! Seriously, like a conspiracy theory nut's wet dream.


I will definitely continue the series.

Raphe said I was beautiful and I believed him. I am such a pathetic cliche.


If you enjoy YA, and PNR/Urban Fantasy with some dark undertones a 'everyone IS out to get me' feel to it- RUN, don't walk and get your own copy!

I was born on the east coast and went to Cornell University. After college I worked as a writer for Ringling Bros. Barnum & Bailey Circus. It was a fun first job and I learned how to write quickly, and also that when elephants sneeze on you it's very (VERY) messy. After a year in the circus, I moved out west. I lived in Aspen, Colorado where I skied as much as possible and worked as a waitress in a Mexican restaurant. Great experience but I learned that waitressing is hard (HARD) and I'm not very good at it.

After Aspen, I moved to San Francisco, California where I worked as a writer for University of California, San Francisco and wrote freelance for LucasFilm. At UCSF I learned that sitting in a cubicle under fluorescent lights dulls my soul. LucasFilm taught me that writing freelance, especially fiction, is fun (FUN). So I headed to graduate school in Boulder, Colorado to further hone my skills.

For the first part of my freelance writing career I wrote sport autobiographies. I'd visit and travel with an athlete like Monica Seles, Bela Karolyi, Nadia Comaneci or Apolo Ohno and then write their book. It was a terrific job, but after ten years and tons of incredible experiences I got tired of writing other peoples' stories and not my own.

I've always loved books with adventure, magic, and dark forces. I'm a huge fan of Stephen King, Peter Straub, Neil Gaiman, Suzanne Collins and George R.R. Martin. Those writers allow a reader to lose themselves in stories that are intense, sometimes other-worldly, yet strangely believable. I feel incredibly lucky that now I have the chance to create books for readers that will hopefully captivate and transport them into a world where the supernatural is possible with characters that they can relate to who are flawed yet totally compelling.

Today I live in the Pacific Northwest with my amazing husband, Henry, and our mostly loveable (but sometimes vorpal) Vizsla, Boone. When I'm not conjuring a story, I love to kite-board, bike, ski or plan adventures with Boone and Henry, who both make me laugh for different reasons and who are the best partners in fun a gal could ever imagine

Check Out the Entire Tour!
There have been some AMAZING stops- giveaways, character interviews and more!