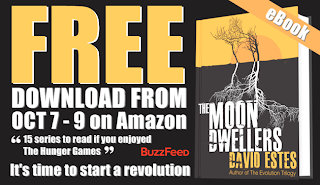 MARK YOUR CALENDARS AND SET YOUR ALARMS FOR THE REVOLUTION!

It's time to start a revolution!  And maybe read about one, too!   The Moon Dwellers, the first book in the Dwellers Saga by David Estes will be FREE on Amazon Oct 7-9!!  On those dates, you may download the ebook on Amazon for FREE!  This is a super-dee-duper deal, so you'll want to take advantage of it!

The Dwellers Saga was mentioned in a recent Buzzfeed article as one of "15 Books Series to Read If You Enjoyed The Hunger Games," along with many other well respected series:  The Divergent Series by Veronica Roth; Delirium by Lauren Oliver, The Gone Series by Michael Grant, along with others.

You can read about the books that make up the list HERE.


Dark Obsession Chronicles gives the series as a whole a rating of: 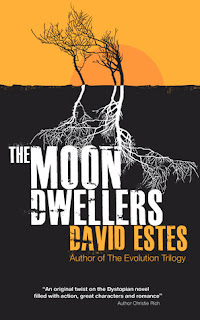 In a desperate attempt to escape destruction decades earlier, humankind was forced underground, into the depths of the earth, creating a new society called the Tri-Realms.
After her parents and sister are abducted by the Enforcers, seventeen-year-old Adele, a member of the middle-class moon dwellers, is unjustly sentenced to life in prison for her parents' crimes of treason.
Against all odds, Adele must escape from the Pen and find her family, while being hunted by a deranged, killing machine named Rivet, who works for the President. She is helped by two other inmates, Tawni and Cole, each of whom have dark secrets that are better left undiscovered. Other than her friends, the only thing she has going for her is a wicked roundhouse kick and two fists that have been well-trained for combat by her father.
At the other end of the social spectrum is Tristan, the son of the President and a sun dweller. His mother is gone. He hates his father. Backed by only his servant and best friend, Roc, he leaves his lavish lifestyle in the Sun Realm, seeking to make something good out of his troubled life.
When a war breaks out within the Tri-Realms, Tristan is thrust into the middle of a conflict that seems to mysteriously follow Adele as she seeks to find her family and uncover her parents true past.
In their world, someone must die.

David Estes was born in El Paso, Texas but moved to Pittsburgh, Pennsylvania when he was very young. He grew up in Pittsburgh and then went to Penn State for college. Eventually he moved to Sydney, Australia where he met his wife and soul mate, Adele, who he’s now been happily married to for more than two years.
A reader all his life, David began writing novels for the children's and YA markets in 2010, and has completed 14 novels, 12 of which have been published. In June of 2012, David became a fulltime writer and is now travelling the world with Adele while he writes books, and she writes and takes photographs.
David gleans inspiration from all sorts of crazy places, like watching random people do entertaining things, dreams (which he jots copious notes about immediately after waking up), and even from thin air sometimes!
David’s a writer with OCD, a love of dancing and singing (but only when no one is looking or listening), a mad-skilled ping-pong player, an obsessive Goodreads group member, and prefers writing at the swimming pool to writing at a table. He loves responding to e-mails, Facebook messages, Tweets, blog comments, and Goodreads comments from his readers, all of whom he considers to be his friends.
​
Learn more about the author at: ​http://davidestesbooks.blogspot.com​

Email ThisBlogThis!Share to TwitterShare to FacebookShare to Pinterest
Labels: Dystopian, Interviews and Promotions, YA