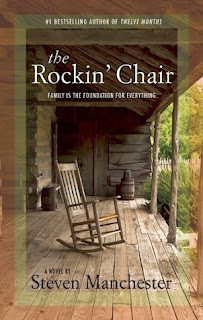 Brief Synopsis:
Memories are the ultimate contradiction. They can warm us on our coldest days – or they can freeze a loved one out of our lives forever. The McCarthy family has a trove of warm memories. Of innocent first kisses. Of sumptuous family meals. Of wondrous lessons learned at the foot of a rocking chair. But they also have had their share of icy ones. Of words that can never be unsaid. Of choices that can never be unmade. Of actions that can never be undone.

Following the death of his beloved wife, John McCarthy – Grandpa John – calls his family back home. It is time for them to face the memories they have made, both warm and cold. Only then can they move beyond them and into the future.

A rich portrait of a family at a crossroad, THE ROCKIN' CHAIR is Steven Manchester’s most heartfelt and emotionally engaging novel to date. If family matters to you, it is a story you must read.

You know that feeling, hanging out with your grandfather, smells wrap around you that are quintessentially him... it's comforting.  Like drinking homemade hot chocolate while wrapped in a quilt made by your grandmother.  So warm, comforting, familiar, and loving.  At least those were my experiences, and this book made my heart ache to smell that mix of Cigar smoke and Shalimar perfume that always permeated their house.  I missed them so much reading this book, missed that chance to hear their words of wisdom, all the stories I never heard, knowing I'll never play Gin-Rummy again with my chain-smokin' Babcia (that's Polish for grandmother and there would be hell to pay if I called her grandma.  She's rolling in her grave right now, no doubt, just having even referred to her in explanation.)  Sorry for the odd stroll down memory lane, but to me, that's the heart of this book.

I was approached for a review on this, and though I've seen glowing and brilliant reviews, I was hesitant.  There always seemed like some shinier book, a child getting sick (or practically thrown out of Kindergarten- trust me, don't ask), or doctor appointments, football season starting... long story short (too late) I was dragging my feet.  A few well placed prods, and reminder that I agreed to this... I opened the book.  The moment we first get inside the head of Alice, of maybe even some of her last 'lucid' moments, I was hooked.  Through one family, we see the best and worst of human nature.  One journey, even the journey of a 'simple' rockin' chair, proved so touching to me.

No sugar coating here, there are certainly Christian overtones, and this is far from steamy; usually books that take it too far become too preachy, grate against the inner rebel that says, "I must decide for myself what I believe."  These words, just like Babcia and Dziadziu, are not judgmental or unwanted; it was beautiful and uplifting to see their family rise up from the ashes of their mistakes and despair.  I was highlighting like mad, and able for a brief moment to see the rainbows in life, and smile.

I highly and wholeheartedly recommend this book.  It touched my heart, and I am so glad I read this, and absolute triumph of the human spirit. 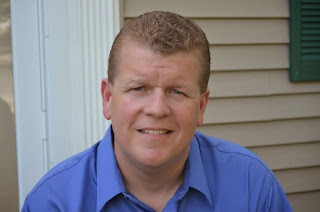 Author Bio:
Steven Manchester is the published author of the #1 best seller, Twelve Months, as well as A Christmas Wish (the holiday prequel to Goodnight, Brian) and Goodnight, Brian. He is also the Pressed Pennies, The Unexpected Storm: The Gulf War Legacy and Jacob Evans, as well as several books under the pseudonym, Steven Herberts. His work has appeared on NBC's Today Show, CBS's The Early Show, CNN’s American Morning and BET’s Nightly News. Recently, three of his short stories were selected "101 Best" for Chicken Soup for the Soul series.
steven.h.manchester@sunlife.com
http://www.StevenManchester.com
http://www.facebook.com/#!/AuthorStevenManchester

Alice could feel the sun on her eyelids before she dared opening them. Beginning with a squint, she was blinded by the light that engulfed the room. Taking a second to adjust, she shook off the two quilts that restrained her, and then grabbed for her flowered housecoat at the foot of the massive bed. Throwing it on, she steadied her tiny feet into a pair of worn moccasins, all-the-while wondering, Why didn’t Ma let me sleep in? It don’t make no sense. It’s Saturday…with no responsibilities to school or church. She felt tired, more exhausted than usual, but waking to a fire burning into her pupils was certainly not the way to start such a pretty day. Making the mental note, I’ll have to talk to Ma about the rude awakening, she stumbled and had to brace herself at the doorway. Her mind had sent some message that her body could not interpret. Brushing it off as fatigue, she started again toward the kitchen, thinking, Maybe Ma will let me help with breakfast?
Grabbing the dented copper kettle off the stove, she turned to the sink and let the water flow like one of the fresh mountain springs that ran out in the backyard. She lit all four burners, placed the kettle back on the stove and began humming a childish tune. The last embers in the wood stove made her nostrils flare at the distinct scent of burnt oak. Smells like the remnants of a late night’s chill, she thought, one of my chores to remove. But she couldn’t recall bringing in the wood, or lighting a fire. Shrugging it off, she snugged down on the robe’s cotton belt, folded her arms across her chest and continued to hum.
She wandered toward the kitchen window and, though she could not have fought it off, nor even detected it, her mind was suddenly exposed to a different reality. Like a child discovering a new world through ancient eyes, she peered out the window and her jaw went slack.
A stranger was busy at work and the sight of him made Alice’s mouth go dry. Her heart began to race and her breathing became shallow. Yet, though the man’s presence absolutely terrified her, his every movement was hypnotizing. Trembling, she stood paralyzed and watched.
He was a large fellow, maybe six feet or better, with shoulders as broad as his smile. In his fists, he held cracked corn, scattering it in a pattern so that every chicken had its fair chance. He was an old-timer, his face wrinkled and weathered like his callused hands. In the middle of that chiseled face sat the biggest nose. Curiously—as if she’d thought it a million times before—she decided that it showed great character. For a cruel second, he turned toward the window, making her squirm with anxiety. She relaxed, though, when she was sure that his liquid blue eyes had not found her. He returned to working slow, his every move filled with purpose and kindness.
But that moment of peace only lasted one single sigh of relief. As if caught in an inescapable nightmare, she watched the man’s three-legged dog limp straight to the window, glance up and tilt his head—cynically. Though she could not manage the words from her constricted throat, her eyes begged for the animal’s silence. Please don’t, she pleaded in her mind. Please…please…please… But it was not to be. The crippled mutt barked out his wailing alarm, calling his master’s attention to her. In an instant, she felt her knees buckle, as the room spun slowly—in a cruel sort of way. She tried desperately to hold on, but the last thing she saw was a red cap and green overcoat rushing for the house.
“Oh God...no!” she screamed, but the stranger kept coming. He’s comin’ to get me, she feared, and though her mind pleaded for her legs to flee, they would not budge. She collapsed to the cold linoleum floor and awaited the worse.

With no more than a stern look, Three Speed lay down on the porch, the storm door slamming in his silver-haired face. John raced through the parlor and could hear the teakettle screaming for help. Breaking the kitchen threshold, his worried eyes caught Alice lying near the bottom cupboard. Her frail body was rolled up in the fetal position and her thumb was stuck in her mouth. As if he were approaching a wounded bird, he slowly kneeled down beside her and held out his hand. She swayed back and forth, humming louder with each movement. For what seemed a lifetime, she avoided his stare. And then finally, courageously, she glanced into his eyes. For a moment, she looked as if she was going to accept his hand but, in the last glimmer of such a hope, she pulled back, retreating deeper into her tortured mind.
“It’s me, darlin’,” John whispered. “It’s John…your husband.”
“You do look some familiar,” she mumbled. But still, her eyes betrayed her lack of trust.
Again, he whispered, “Come on, Alice. I’m not gonna hurt ya. You’re just sick, ol’ girl.” He opened his hand even wider and watched as her horrified eyes gradually registered his words as truth.
Like an abandoned child who had lost all hope only to find that her parents had not meant to leave her behind, Alice raised her arms and began to weep mournfully. “I’m sorry…” she whimpered.
In one easy motion, John scooped his tiny wife into his arms and kissed her frightened face. Turning off all four burners—the majority that did nothing but lick at air—he carried Alice like an infant to their bedroom. All the way, he could taste the salt of her tears on his tongue. It was a bitter taste and he hated it, yet he knew all-too-well that it was only a small taste of what was still to come.
On the way up the stairs, Alice sobbed, “I’m so stupid now…so dumb.”
“You shoosh now,” John whispered. “That just ain’t true.”
He placed her back into their four-poster bed and, conforming to their daily ritual, gave her the two white pills and a small glass of water to wash them down. He talked slow and gentle to her, trying to remove her fears and keep her mind in the present. “Time to rest, Alice,” he whispered. “You just need to get some rest, is all.”
For a moment, she smiled—as if she believed him. But in the next moment, her eyes filled with panic and she pushed herself toward the headboard, scrambling desperately to create a safe distance between them. “Don’t you touch me, mister!” she screamed. “Don’t you dare lay a finger on me!”
She’s getting’ worse, he thought, and began humming a lullaby.
“Mama! Mama…help me!” she screamed out, but as she called out in a panic for her mother the pills began to take effect. He stroked her hair until her mind eventually removed itself from the harsh reality of now and found a more pleasant place to dwell. When John was sure that Alice would need nothing more, he kissed her and returned the cap back onto his throbbing head.

Email ThisBlogThis!Share to TwitterShare to FacebookShare to Pinterest
Labels: Interviews and Promotions