I have a stellar guest post from the author,
Emi Gayle,
for this stop of the After Dark Blog Tour!

If I’d never heard of me
would I read my book?

This is an amazing question and a really, really hard one. After Dark is my first release, though the entire trilogy is written. It’s PNR/UF which is my favoriate genre because I can really make up what my characters can do. The sky is the limit to use the old cliche.

When I think about other books that I’ve fallen most for (by other authors), the first thing that captures me is the cover. If that’s not rockin’ I’m not lookin’. No matter who the author is, if the cover stinks, I can’t get past it. Yes, I totally realize this is ridiculous, that there are loads of great stories inside so-so covers, but I’m me. I’m very visual. Covers gotta rock my socks.

When I look at my books (all three of them, but After Dark in particular), it’s very hard to be subjective! I look at the beautiful covers of other books and think, yes! I would read these! (Because they are my favorite genre)

Then, I go and read the blurbs. If the blurbs don’t draw me in, again, I’ll re-shelve a book. For example, if there are errors in a blurb or it makes no sense or it has absolutely nothing to do with the cover, I start to wonder who put it together and what were they thinking and would the story have the same ‘issues’? Again, totally a subjective thing, but it’s something really does hit me any time I pick up a book.

So ... I look at the blurbs for After Dark and Day After, and I think, yes! I would totally read these books even more! (Because again the stories are in my favorite genre)

But that’s me. Me the author. Me the writer who poured blood, sweat and tears ..., okay, no blood or even sweat, but definitely tears into my work. *I* love my stories.

So for me, with my books, I feel like I’m still hitting that proverbial nail here. I’ve got great covers and blurbs so yes, as a reader, I’d try my books—or at least, I’d open to the first page and see if it grabs me by the throat and carries me forward.

If it did, I’ll be sunk and reading until I’m up all night wanting, needing, begging for all the secrets to be revealed and the happily ever after to arrive.

So with my debut, After Dark, the first of the 19th Year trilogy, I think I’ll go re-read it ... just one more time. 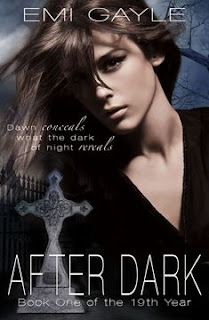 In exactly eight months, five days, three hours and thirteen minutes, Mac has to choose what she’ll be for the rest of her life.

She has no choice but to pick. As a Changeling, it’s her birthright. To Mac, it’s a birthchore. Like going to school with humans, interacting with humans, and pretending to be human during the pesky daylight hours.

Once darkness descends, Mac can change into any supernatural form that exists — which makes her as happy as she can be. That is, until Winn Thomas, the biggest geek in her senior class figures out there’s more to what hides in the dark than most are willing to acknowledge.

In this first of the 19th Year Trilogy, Winn might know more about Mac than even she does, and that knowledge could end their lives, unless Mac ensures the powers-that-be have no choice but to keep him around.

“Winn and Mac were perfect for each other in every way possible. It was like two magnets finally finding each other and connecting.”


“Awesome beyond awesome! For lovers of YA Paranormal, this is a MUST READ!!!”

“Talk about can't put down...I accidentally opened this one instead of the book I was scheduled to read. Made the mistake of reading the first paragraph -- and I have not been able to put my iPad down since!”

Emi Gayle just wants to be young again. She lives vicariously through her youthful characters, while simultaneously acting as chief-Mom to her teenaged son and searching for a way to keep her two daughters from ever reaching the dreaded teen years.

Ironically, those years were some of Emi's favorite times. She met the man of her dreams at 14, was engaged to him at 19, married him at 20 and she's still in love with him to this day. She'll never forget what it was like to fall in love at such a young age — emotions she wants everyone to feel.

Now the main character, Mac, has a choice to make... you can be any supernatural critter/race you want, so which would YOU choose?
Click Here for Direct Link to Poll

*For entertainment purposes only*