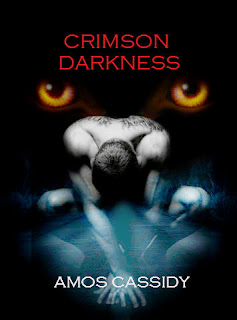 London is in the grip of an unnatural darkness. Rose is in the grasp of an unrelenting power and Raven and Thistle, along with their supernatural allies, are battling to survive and find a way to restore their home city.

For the fey, the song remains the same. They must return the power to Faerie or die. Unfortunately for them, the task has been superseded by an even more important one - help save Earth or perish along with it!

Now enemies must work together as allies if they are to save their worlds from an ancient threat…
CRIMSON DARKNESS LAUNCH BLOG TOUR 2012
Join us as we celebrate the upcoming launch of Crimson Darkness, the second book in the Crimson Series. There will be sneak peaks, character guest posts and plenty of giveaways. Don’t miss out! Add these dates to your diary!
The Tour Stops:
20th August – Join us on Laura’s blog to find out what some of the Crimson Cast would like for their birthday!
http://littlereadridinghood.com/
21st August – Join Kerry for sneak peek into Crimson Darkness and a chance to win a copy in a giveaway!
http://www.musings-of-a-bookworm.org/
22nd  August – Head on over to see Lissa for another sneak peek and giveaway!
http://booknutreviews.blogspot.co.uk/
24th August - Pop over to Think Think’s blog for another glimpse into the pages of Crimson Darkness and a giveaway.
http://thinksbooks.blogspot.co.uk/
25th August – There’s some karaoke going on over in Lissa’s corner today!
http://booknutreviews.blogspot.co.uk/
26th August - Alana has a glimpse into the past, back when the werewolves were in their teens.
RIGHT HERE!
27th  August – Pay Maggie a visit for another Crimson Darkness sneak peek!
http://readingdiva.com/
28th  August -  Join Mel for a previously unpublished scene from Crimson Midnight, and a giveaway!
http://soireb.blogspot.com/
29th August – Chill out with Sheri for her interview with Raven, and another chance in a giveaway!
http://shutupandreadgroup.blogspot.co.uk/
After the Blog Tour, come and join us for an interview with the werewolf pack J
30th August – AMOS CASSIDY – MEET THE PACK!
http://crimsonseries.wordpress.com/
And then…
CRIMSON DARKNESS is released on September 1st 2012 !
Available on:
Amazon UK
Amazon
Smashwords
Posted by LoonyAlana at 1:00 AM