Crux Blog Tour... *and there was much rejoicing!*


OK... ANY book that quotes Monty Python is a WINNER in my 'book'!

"We shall say 'ni' again to you if you do not appease us."

This is a REALLY fabulous YA story... and this YA is a very adult YA. I wouldn't worry about teens reading it, but there is some racy undertones.

"Bite your lip. It's hot. Makes me want to go kick some Viking ass."

The story revolves around Birdie, who has had a less than stellar life. It's so nice to see a somewhat younger character still set today that hasn't been born with a silver spoon or raised by the Cleaver family. There are big bad things out there, and Birdie knows it. She still keeps her wits about her and doesn't succumb to petty greed or other base emotions.

Do you have a magic mirror that sees into my brain, Julie? I say this ALL the time!

The story flows well, absolutely grabs you from the very first page. And the wit, I absolutely adore books that can make me laugh. And Monty Python and Lord of the Rings references are NEVER a bad thing.

"I've been watching you, Birdie."
"That answer just earned you ten more points on your already very impressive creep-o-meter score."

I really appreciated how VERY unique, and different this story was. I love vamps and shifters, but this was just brilliant. Unique slant all it's own, adds history and lore in small doses, adds a healthy helping of swoon-worthy romance, drags it through a field of fantasy while still keeping it's feet firmly grounded in the present. You get supernatural epic quest meets a rags to riches romance/drama soap... in a good way, definitely in a good way.

"No. Oh, hell no. 'You gotta be kidding me!' I clench my fists. "I am not Bilfro Baggins. You are not a wizard with a pointy hat, and this is not the one ring of power.'"

And Grey... must not leave out at least a teaser of the rock n' roll hotness that is Grey! Hey's hot, he's in a band, he's like rich... but like any good hot male lead, he has his own problems. Grey has that mysterious, can't look away allure that makes you want to be in Birdie's shoes.

"'Perfect technique,' he says, as I manipulate the sticks. 'You're golden.'
I want another lesson."

Okay, Dark Obsession Chronicles is in for a real TREAT!
Julie Reece, author of Crux has joined me today for an interview!
*And there was much rejoicing*
So Julie, first let me say thank you SO much for coming to visit.  I enjoyed your book so much!  For your first book you really knocked it out of the park, didn't you?  (Rhetorical question, you don't have to answer that.)
So, first of all I have to know, is Crux going to become a series or remain a stand alone book?  While it's great as a stand alone, I have to admit I would LOVE to see more Grey.  Love those rock 'n roll hotties!

I’m going to just be very transparent here and level with you. I wrote Crux as a stand-alone because I don’t have a ton of self-confidence. I know. What? Well, I’m a total chicken and your basic nightmare of insecurity. So I figured I needed to not assume people would fall all over themselves to read a sequel, and I didn’t want to leave my readers hanging.  (I hate that, don’t you?) That’s it. If Crux tanked, I didn’t want to be presumptuous going in. Since then, readers have smacked me with rolled up newspapers because many wrote to tell me they liked it, a lot, and where the heck was a sequel? (I love these people, ps) So all I can say is I may revisit my original idea and change course, but only if I think I can do it real justice J
PS This is as good a place as any to say thank you for liking my book and all the lovely things you’ve said about it J XOXOXO

What part, or character, was your favorite to write about in Crux?

Ugh. You’re so mean, impossible question! Lol. If I had to say, I’d choose my  favorite part to write as: the end battle scene (never mind what that might indicate about my mental state). Character, oy, so hard,  it’s a toss-up between digging around in Grey and Birdie’s heads to see what made them tick. I love doing that to people. J

Since Grey is a 'rocker', did you have a specific band or song that you associated with Grey's band in Crux?

Actually, no. My husband is a musician, and I’ve been to a lot of concerts so I could feel the vibe in my imagination and  see the actions and lifestyle. As far as one band … not really more like ten! LOl. I did listen to a lot of Black Crowes, Damien Rice, Seattle Grunge, Goo Goo Dolls,  Coldplay, and for Grey? Maybe Foo Fighters … My Hero.

Did you have a playlist, pictures, or any other multimedia inspiration that you used while writing Crux?

No. I’m a big weirdo that has to write in complete (as in library-type) silence.

It seemed in Crux, that there was an almost predestined occurrence of evens- it was certainly serendipitous how the different characters met and became close... Do you believe everything happens for a reason?

Absolutely, yes. One of the themes I tried to lay down in Crux was  hope. No matter how bad things are, no matter how lost you feel, wait. Wait one more day, and another, and another if you have to, and see what might happen. I believe there is a plan for everyone’s life.

What projects do you have on the horizon?

I have one book finished and  in edits that I’m sending out to be shredded by some faithful beta readers. That one is a YA historical paranormal romance and a little racier (romance) than Crux. Still plenty of adventure, though. I also have two other YA novels, both urban fantasy, I’m about a third done writing with each. J

If you could go on a road trip with any person (dead or alive), who would you pick and where would you go?

Edgar Allen Poe, J. R.R. Tolkien, J.K. Rowling and C.S. Lewis for high tea at the Grand Hotel on Mackinac Island in Michigan. Yeah, that ought to do it. J 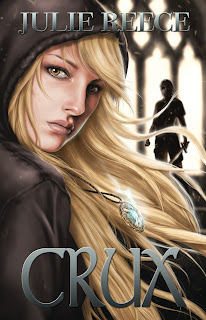 Fun Quick Questions!
What is the average airspeed velocity of an unladen swallow?

24 mph, and that’s quite enough of that young lady, or I’ll be requiring a shrubbery. That or you may be forced to wipe other people’s bottoms and face Tim.

How many licks does it take to get to the tootsie roll center of a Tootsie Pop?

Tattoos or Piercings? (interpret this however you choose)

Tattoos, though I don’t have any, they can be pretty hot on a cute guy

What would you do for a Klondike bar?

Would and have done: barked like a seal. (I’m sorry to say, but tis true)

What is the meaning to life, the universe, and everything?

And finally ... your character said "Jiminy Cricket!" in Crux.  Do you have a magic mirror into my brain?  I say this ALL the time!

You do? I happen to love that! Kindred spirits

Julie, thanks so much for putting up with my goofy questions!  Your book is an absolute gem, and I hope everyone runs out to try it for themselves!

Aw thanks, I really hope people will like it, and thank you so much, I had a blast. You are a fun and awesome host!!! 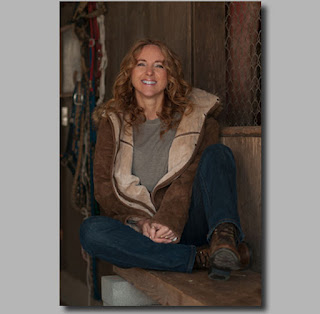 Born in Ohio, I lived next to my grandfather’s horse farm until the fourth grade. Summers were about riding, fishing and make-believe, while winter brought sledding and ice-skating on frozen ponds. Most of life was magical, but not all.

I struggled with multiple learning disabilities, did not excel in school. I spent much of my time looking out windows and daydreaming. In the fourth grade (with the help of one very nice teacher) I fought dyslexia for my right to read, like a prince fights a dragon in order to free the princess locked in a tower, and I won.

Afterwards, I read like a fiend. I invented stories where I could be the princess... or a gifted heroine from another world who kicked bad guy butt to win the heart of a charismatic hero. Who wouldn't want to be a part of that? Later, I moved to Florida where I continued to fantasize about superpowers and monsters, fabricating stories (my mother called it lying) and sharing them with my friends.

Then I thought I’d write one down…

Hooked, I’ve been writing ever since. I write historical, contemporary, urban fantasy, adventure, and young adult romances. I love strong heroines, sweeping tales of mystery and epic adventure… which must include a really hot guy. My writing is proof you can work hard to overcome any obstacle. Don’t give up. I say, if you write, write on!

a Rafflecopter giveaway
Posted by LoonyAlana at 2:01 AM