We're so excited to host the release day launch for Daisy Prescott's Confessions of a Reformed Tom Cat!! Daisy is sharing an excerpt with us, and a fantastic giveaway, so be sure to read all the way down to check out all the release day excitement!! 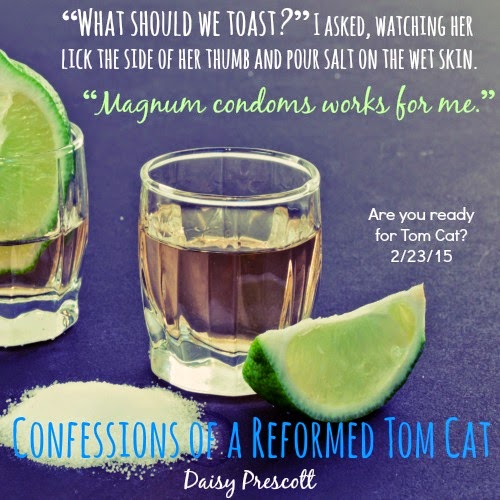 I, Thomas Clifford Donnely, am a manwhore.

I’ve been told I’m irresistible to women. Like catnip for a different type of pussy-cat. I guess you could call me a Tom Cat.

This is the story about how I lost my wingman, broke all my own rules, and found myself falling in love.

Tom Donnelly isn't the marrying kind, or the dating kind. Even after losing his #1 wingman to love, he doesn't see the point in relationships. When his sister's best friend returns to Whidbey Island and propositions Donnelly for a one-night stand, he breaks one of his biggest rules—no fooling around with his sisters' friends. It's just sex, nothing more. That's what Tom does and does well.

Hailey King is more than a match for Tom's flirtations. She's known him most of her life and has heard the rumors about his "skills" for years. When her perfectly planned future falls apart, will the last man she should ever fall for turn out to be more than a one-night stand?

After finishing this just yesterday, I was struck by an odd thought... If John Hughes (the filmmaker) were to make a romantic comedy (not quite the angsty, iconic 80's films that I always think of) - this would be it.  Tom's got that bad boy, manwhore aura but deep down he's such a great guy.  Loyal and loving, creative and romantic without even realizing it.  Yet the motorcycle and his boat, the Master Baiter, cement that confirmed bachelor and bad boy vibe (he even manages to fool himself along with everyone else that he's incapable of relationships)... what is more enthralling that seeing that one woman that can sneak through his defenses and shake his very foundation.

Maybe it was my reaction through the book that made me think of that John Hughes comparison, because I was giggling and blushing like a schoolgirl.  Oh, that banter.  I must admit.  I adore the banter.  I live for it and revel in it.  The banter was plentiful.  From the smallest digs of his nickname for Hailey: Idaho, to less tongue-in-cheek drinking toasts to Magnum condoms.  The icing on this banter cake was that I liked both Hailey and Tom.  While Tom really is a manwhore, he's quite loveable and a wee bit self-deprecating.  He still has his own inner compass that makes him into a more modern-day knight in not-so-shining armor.  He makes mistakes, he gets around like the Tom cat he's nicknamed after, but still can't help but fall for the girl despite himself.  Hailey, too, makes her share of mistakes (*cough*asshat*cough*) but she doesn't just swoon and bend over.  She gives back as good as he dishes out and it's just entertaining to behold.

I'm still giddy and have this stupid smile plastered to my face thinking back on my reading.  I should also probably point out that I actually read this from the stand-alone book angle.  I have not read the previous books in the series (but they are moving up my TBR list based on this book) so my assessment is based upon Tom Cat.  If you haven't read any of the previous titles in the series and are interested in this one, there is no requirement to pick up the others in order to understand these characters and story.  It stands on it's own two feet, so to speak, and makes Daisy Prescott a definite author of interest in my book.

(I was gifted an advance copy for review.  No guarantee of a favorable review was promised, my thoughts are my own)

Before writing bestselling contemporary adult romances, I dreamed of being an author while doing a lot of other things. Antiques dealer, baker, blue ribbon pie-maker, fangirl, freelance writer, gardener, pet mom and wife are a few of the other titles I've acquired over the years.

Born and raised in San Diego, I currently lives in a real life Stars Hollow in the Boston suburbs with my husband, our dog Hubbell, and an imaginary house goat.