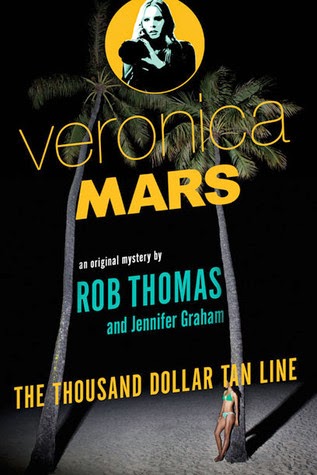 From Rob Thomas, the creator of groundbreaking television series and movie Veronica Mars, comes the first book in a thrilling new mystery series.

Ten years after graduating from high school in Neptune, California, Veronica Mars is back in the land of sun, sand, crime, and corruption. She's traded in her law degree for her old private investigating license, struggling to keep Mars Investigations afloat on the scant cash earned by catching cheating spouses until she can score her first big case.
Now it's spring break, and college students descend on Neptune, transforming the beaches and boardwalks into a frenzied, week-long rave. When a girl disappears from a party, Veronica is called in to investigate. But this is not a simple missing person's case. The house the girl vanished from belongs to a man with serious criminal ties, and soon Veronica is plunged into a dangerous underworld of drugs and organized crime. And when a major break in the investigation has a shocking connection to Veronica's past, the case hits closer to home than she ever imagined.

If you're a fan of Veronica Mars, this is a slam-dunk. Especially in audio with Kristen Bell narrating... oh, yeah (damn skippy that aspect rocks.)  In all honesty, if a different narrator had been chosen I likely wouldn't have purchased the book.  I must also say, it fits really well in the 'Veronica Mars' universe. It's not like there are characters acting way out of their 'norm' or anything like that; it was comfortable without being boring.

One thing that must be said... in terms of 'romance' it was on the lacking side. Great mystery, great snark, great Veronica... but very little-to-no romance. That's my sore sticking point in regards to the reading experience. Also, though this totally goes against my usual M.O. and opinion, I like the 'screen' version better. I spent the entire book pretty much imagining what it would look like on TV, and really I think given a choice I'd prefer my 'Veronica' experienced via the screen. So, the book is not as good as I think the film version would be.


Another small, itty bitty little issue... the title.  I see how it kinda correlates and such, but it's just odd.  I don't think it was a good choice, I don't think it suits the book, and I think it's lacking a certain Veronica Mars charm.  Small thing, but it stuck out.

If you're a fan, it's a Must-Have, Must-Read. If you're not, I doubt this would suddenly turn you into a fan.

Posted by LoonyAlana at 3:17 PM