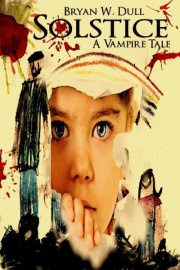 In Gavin Moxley's world, there is no thin line between right and wrong. In a personal crusade to help sever a line of disease carried by a clan of vampires; Gavin has no choice to be ruthless. The Vampires are purposely infecting the human population…waiting for humans to actively pass it on to each other. Gavin takes no chances and executes them one by one. Not strong or powerful, finding humans before they turn into full vampires is ideal and Gavin’s best bet.
Yes, this is Gavin’s life…
…And nothing ever changes it until a young half breed vampire with special abilities, Solstice, attaches and makes herself a fixture in his life when she asks for his help and protection and when a reluctant Gavin agrees he joins a dangerous game of cat and mouse. There is no safe place and the pair are constantly watching their backs. Torn between his hate and his love for Solstice Gavin is thrown into a moral dilemma that only he can figure out but two things are clear…
His faith and Humanity are being tested and the past is not always forgotten.


Be sure to check out the Solstice Release Day Facebook Party!
FREE SWAG!  FREE EBOOKS!

...And Coming Soon!
An Interview with Bryan W. Dull!
Posted by LoonyAlana at 9:45 AM